“On the twenty-third day of the second month, in the one hundred and seventy-first year, the Jews entered the citadel with shouts of praise, the waving of palm branches, the playing of harps and cymbals and lyres, and the singing of hymns and canticles, because a great enemy of Israel had been crushed.” (1 Maccabees 13:51)

“Carrying rods entwined with leaves, beautiful branches and palms, they sang hymns of grateful praise to him who had successfully brought about the purification of his own place.” (2 Maccabees 10:7)

“Then I saw heaven opened, and behold, a white horse! The one sitting on it is called Faithful and True, and in righteousness he judges and makes war. His eyes are like a flame of fire, and on his head are many diadems, and he has a name written that no one knows but himself.  He is clothed in a robe dipped in blood, and the name by which he is called is The Word of God.” (Revelation 19:11-13)

“Rejoice greatly, O daughter of Zion! Shout aloud, O daughter of Jerusalem! Behold, your king is coming to you; righteous and having salvation is he, humble and mounted on a donkey, on a colt, the foal of a donkey. I will cut off the chariot from Ephraim and the war horse from Jerusalem; and the battle bow shall be cut off, and he shall speak peace to the nations; his rule shall be from sea to sea, and from the River to the ends of the earth. As for you also, because of the blood of my covenant with you, I will set your prisoners free from the waterless pit.” (Zechariah 9:9-11) 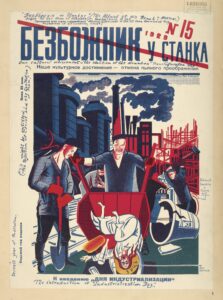 “Christianity is like a nail. The harder you strike it, the deeper it goes.” (Yemelian Yaroslavsky)

“So when they had come together, they asked him, “Lord, will you at this time restore the kingdom to Israel?” (Acts 1:6)

“But you will receive power when the Holy Spirit has come upon you, and you will be my witnesses in Jerusalem and in all Judea and Samaria, and to the end of the earth.” (Acts 1:8)

“In those days Peter stood up among the brothers (the company of persons was in all about 120) and said…” (Acts 1:15)

“Who can still believe today that we are developing toward a state in which the kingdom of God reigns in the world of nations, in culture, and in the life of the individual? The earth has been plowed too deep by the curse of war, the streams of blood and tears have swollen all too terribly, injustice and bestiality have become all too cruel and obvious for us to consider such dreams to be anything but bubbles and froth.” (Helmut Thielecke – 1945)

“So they were seeking to arrest him, but no one laid a hand on him, because his hour had not yet come.” (John 7:30)

“These words he spoke in the treasury, as he taught in the temple; but no one arrested him, because his hour had not yet come.” (John 8:20)

“Whoever finds his life will lose it, and whoever loses his life for my sake will find it.” (Matthew 10:39)

“Even if I am to be poured out as a drink offering upon the sacrificial offering of your faith, I am glad and rejoice with you all.” (Philippians 2:17)

“He is no fool who gives what he cannot keep to gain that which he cannot lose.” (Jim Elliot)